Max Dean is one of the co-founders of The Yancy St. Speakeasy. Born in Western New York State, Max always knew he was meant for greater things than the cow pasteurs and corn fields that surrounded his town. With a passion for storytelling that goes all the way back to his German grandmother’s bedtime stories, Max became an avid reader and absorbed any story he could find from an early age. His childhood years saw him as a bit of an introvert, preferring not draw the ire of those who were not up to his intellect… Which was essentially everyone, ever.

Graduating with honors, obviously, Max attended The State University of New York at Geneseo because everyone was going to the mainstream schools like Harvard and Johns Hopkins. Max elected to study psychology, primarily to understand why no one else was a smart as he was. Needless to say, there was no clear answer and Max had to simply accept that a conversation with most people would be an utter bore for the rest of his life. Max attended Geneseo for four years before he left, as graduating college was something he considered “a gold star from society” that he wanted no part of. He is also quoted as saying “I was mildly tempted to graduate when the college pleaded with me and said they would make me honorary Dean of Badassery, but then I got bored.”

After college Max moved to Key West, where somehow he became even more irresistably seductive and witty. By the time he met Tracey LaFrance, there was no hope for anyone to deny a request that came straight from Max’s lips. Often called The Future Silver Fox, Max should have known that when he uttered the phrase “Hey do you want to do a podcast with me?” that it was in reality a command. Max had followers of the Yancy St. Speakeasy before the podcast even had a name, and fans signing a petition to name call it “The Greatest Podcast in History” before the first episode was ever recorded. Now with a wife and son, Max has mastered all of life. 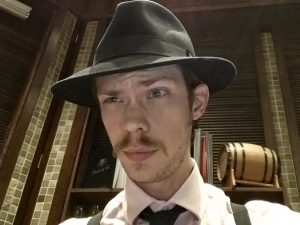